As the SpaceTime Helix coiled in the dark, Italian artist Michela Pelusio gathered the threads of our imagination from the past, present and future, turning Nxt Stage into a portal for time travel.

In a coming together of art, tech and the looming pandemic restrictions of a darkening season, the transformative audiovisual performance came right on time – exploring the moodas well as one of our fundamental questions: What’s inside the black box? Mid November at Nxt Museum revealed the answer to be – light and infinitely resonant life. 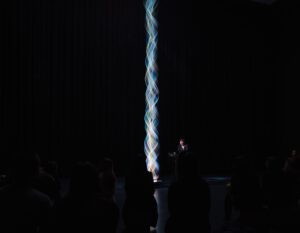 Usually at Nxt stage – a 370sqm projection surface for video art – all eyes are on the screen, but this time we had our backs turned to it and our gaze directed towards a spot lit string, which stretched from a wheel device on the floor up to the ceiling, attaching to a revolving hook. Next to this was a stand for a controller system from which Michela would bring the helix to life.

“…it was important to move from this idea that new media art is only on screens and square frames but to actually really use the space and morph the light, time and us ourselves” says Nxt curator Bogomir Doringer.

As our eyes adjusted to the darkness, the shapes of Amsterdam’s culture curious emerged from across the semi-circle around the helix. Mirroring each other’s curiosity in the mounting excitement, the experience before the experience was that of being together, waiting together, looking forward to what was to come.

A woman figure appeared behind the controller, settling the atmosphere – her measured touch sent flashes of bright light all down the string. Like lightning, cracking sounds cut through the ethereal whirring coursing through the airwaves. The flashes quickened, building tension that deepened the breath in every chest as the shapeshifting vision came into focus.

With a background in sculpting and a masters in Art Science from The Hague’s Royal Conservatory, Michela observed the following “I noticed that I could see the different light sources around me in the movement of the string… I could use light like a palette to paint a 3D sculpture that changes in time, and by doing that I could play with perception.”

The development of the helix instrument began with an image – a dreamlike vision of sonic geometry and sculpted light. Making that vision a reality set Michela on a journey to the very origins of sound when she came across the ’Harmony of the Spheres’ by Pythagoras. The theory reasons that the planets orbit in audible harmony; and that the pitch of a musical note relates to the length of the string that produces it. Founded on these ideas, a decade of experimentation with a single piece of string, scale and audiovisual technology resulted in the SpaceTime Helix performance. Taking place at exhibitions all around the world, Michela has awe-struck audiences at spaces like Bozar Centre of Fine Arts Brussels, Max-Planck Institute of Astrophysics in Munich and The National Museum of Emerging Science and Innovation in Tokyo, amongst many others.

The longevity of the performance lies in the nuance of every showing – the string is made out of material that eventually snaps, determining the duration of the sound, which is affected by the scale of the space – elements Michela collaborates with in real-time. This live energy results in a fresh experience for each audience. Further timelessness is captured by the feeling of being transfixed by a campfire – as the strobing helix flickers, the origins of memory are stoked, making visible a story across the ages that we have always been able to feel rather than see.

“She performs it in a very ritualistic way referring to indigenous cultures, rituals, early drawings of helix shapes, which resembles even our own DNA”, concludes Bogomir.

As Michela’s hands worked the controls her eyes remained fixed on the helix – a synergy of creation between them, as though they were inventing each other again and again. The light pulsed rhythmically to the droning soundscape and when the visual symmetry had lulled us into aesthetic calm, Michela stepped out from behind the controller, walked up to the giant helix and with her hand in the light beams – broke the pattern to create something new. With added bits of string tossed into the spinning axis, clips to contain the bulging light in places and let it go in others, we watched as something akin to the birth of the universe unfolded before our eyes.

“The helix is a female creature – my alter ego – I play in the dark, the helix performs”, says Michela.

Nxt Stage serves as a platform and gateway to the art of tomorrow, exhibited today. As a result it is an ever changing space for experiment and a home for modern visionaries to reflect the times across dimensions. If traditionally, a museum is a place which houses objects of historical interest, then Nxt Museum, knocks off the dust, unlocks the black box and finds the light emanating from bright creative futures.

At the very beginning of the performance Michela’s voice sounded out to say, “we come from a dark abyss, we end in a dark abyss, and we call the luminous interval life”. The helix pulls us into the vision that came to Michela in a dream. In the criss-cross matrix of spacetime, vibrating strings locate us in an ever resonant moment – together.

When asked about her vision for the future Michela says, “I’m sure that the art of the future is a collective experience. We will all be one in the matrix”