The light of the night

“Imagine that you are all alone in a dark room. Close your eyes. Lock the door – and dance.”

Said the AI voiceover mixed into the live set of Icelandic music artist, Bjarki. Towering behind him, surprising scenes of warped faces by visual artist Thomas Harrington Rawle melted over the mesmerised crowd in a cascade of pixels. The dancers, deep thinkers, makers and destroyers who gathered on the dance floor at Nxt Museum for this year’s Amsterdam Dance Event, stood unsure of whether to move to the music, or ring their therapist.

For the third year in a row, Nxt Museum and Amsterdam Dance Event hosted an Artist in Residence programme – and this time brought on board Transmoderna – a collective of artists operating at the intersection of electronic music and new media art, grouped around internationally-acclaimed house DJ Dixon. Bringing in a fresh selection of multidisciplinary artists proved to enhance the night with glowing visuals engulfing the dance floor as though in a lucid dream. This addition of digital art to nightlife culture, enabled visitors to find themselves enlightened in the night scene as the beats per minute triggered movement in body and mind. 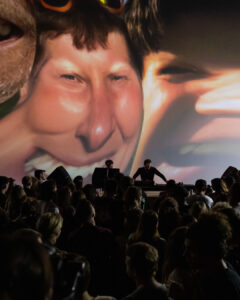 “All nights and performances are surprising; the sounds and visuals continuously morph — it is an unusual contribution to the ADE program, a wild variation of genres and diverse creatives. As the home of new media art we are showcasing art and music melting in the best way, supported by the latest technology.” says Doringer. 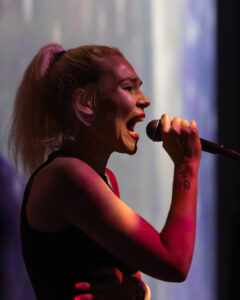 Building on its dedication to facilitating future-forward experiences, Nxt Museum worked together with VerticalCrypto Art – the leading platform for NFT art and culture. Each evening, visitors were presented with a unique QR code for live minting of free NFTs – a first time mint for many attendees, and a digital memento of the unique video artworks sweeping across the dance floor. One day, in a metaverse living room, these snippets of morphing visuals could be the ‘I was there’ collector’s items displayed on virtual walls.

For those collectors, their NFT from this year’s event may trigger the memory of a club and a museum merging into one. The black box of the museum wrapping around digital artworks, like the night hugs the strobing dance scene. They may recall how nightlife traditionally offered a black velvet into which many lost themselves to music; and how for three nights, in the museum space, enticed by bright moving images, their eyes opened, pupils flooded with art, adventurous limbs made new moves, and many found themselves in the light of the night. 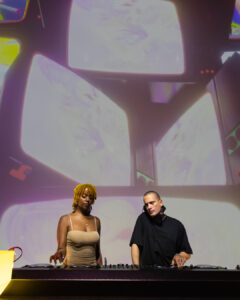 We talked to some of the artists in the charged moments before their performances. These were their vibrations night by night.

— Wednesday 19th Oct
“Now it’s an era where you get the visual and music together, and I think my idea of music is to dissolve space and time, and when you get the visual doing this also, you can make people feel like they don’t belong to this world” said Aïsha Devi, who took some time to meditate before her set and brought aetherave energy to the floor. Coming out from behind the DJ booth to directly offer vibrational vocals, she connected the crowd to different dimensions using her own existence as a vector.

Juliana Huxtable, an artistic all-rounder in the New York night scene, was on the same wavelength, saying, “This collaboration is an opportunity to play with the elements that are in the feedback loop (between dancers and DJs), there’s a whole visual world which in a normal club wouldn’t be such an intentional part of it. It’s an opportunity to shift the intentionality behind everything”. Playing back to back with Bill Kouligas they moved the crowd with surprising pop and rave flavours, rendering time, genres, and identities fluid. 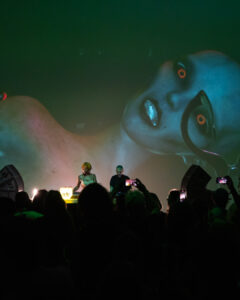 Sound artist upsammy’s offbeat percussion set the tone for the defragmentation of the dance floor that took place all evening. Seeking original sounds she challenged natural rhythm, recalibrating the body to new pathways of movement and percussive dance dissonance. 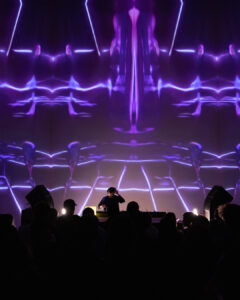 — Thursday 20th Oct
“Parties and politics meet when people go to the dance floor with an awareness of self and choose to connect with the music – with the sound – and revolt, using the body to freely express.” said music artist Nsasi, co-founder of a revolutionary queer collective in Uganda. Describing his approach to music making as ‘Katogo’, which in Ugandan slang refers to a mixture of ingredients, his ease with breaking traditional formulas sounded out in intentional disruptions, jagged breaks and a unique dedication to harshness that had every body in the place tapping into collective muscle memory. 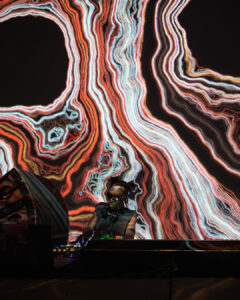 Inspired by new talents emerging all around, pioneering DJ Dixon had the following to say about creating new work,

“The constant in my work is having the courage to risk something. With Transmoderna it’s a way of mixing with artists that I usually wouldn’t meet, we inspire each other. The chance to have this freshness in the clubbing and digital art world, this is what makes it exciting.” 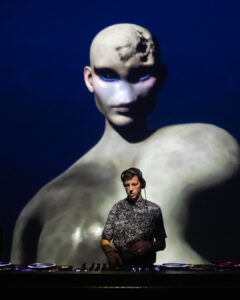 The resulting set, supported by smoke, lasers and diverse influences, gave the techno tribe exactly what they came for – blissful movement manipulation at the hands of a skillful music practitioner.

This dedication to freshness was reflected in Kurdish-Dutch music artist Sarkawt’s opening set. Entrenched in Amsterdam’s underground scene, gritty trance and break beats chopped the airwaves as digital worlds by Transmoderna’s AI ecosystem rose all around the space. 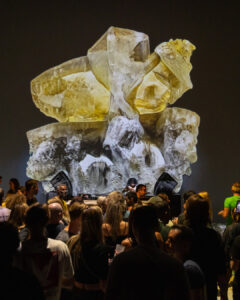 By this day the city of Amsterdam had loosened its top button and the beginnings of dance riot had started to show. Bodies were liberated to the dance floor sooner, people talked to each other more, and the club and museum were starting to rub off on each other. The visuals mirrored this atmosphere of abandon featuring alien-punk digital creatures developed by Transmoderna artists Giusy Amoroso and Aaron Jablonski. These post-apocalyptic ‘disborgs’ danced in sync with the crowd – them in a posthuman future, and the dance floor stomping in step with revolution.

— Friday 21 Oct
“I want to bring something that cuts you a bit off. It’s important. I’m gonna use the space and also the time – let people be in their head a little bit instead of focusing on dancing, and I want everybody to go to therapy after tonight.” said Bjarki before his paradigm shattering performance, ‘Look at Yourself’ with visual artist Thomas Harrington Rawle.

It proved to be true. We all stood there, while the dancing happened between synaptic stimuli in our brain, sending signals to our gut, stirring the darker layers of knowing that are not usually touched in any place other than the night. Digital flames surged across the walls, bearded faces with smeared makeup melted down to the floor, while glitchy sounds were mixed live on the decks. This set put the dance floor in a petri-dish, under a microscope, and on a cellular level said – now look at yourself.
This cross section of dance humanity was mirrored in the back to back set played by techno artists Nene H and Bambounou. 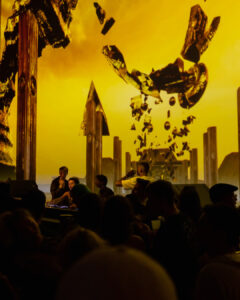 “For some, success is flying to their gigs in a private jet, but with my background – existence is success – and I always treated my work seriously as a part of that – trying to exist in western society. Playing a part of opening the way of our existence – that would be the best outcome of my being in this scene” – Nene H

Slicing through the night in a live BPM battle with Bambounou, they snatched the beat from each other, echoing Nene’s journey of inserting authentic vibrations into society, demanding amplification in a sound off that kept the crowd on their toes.

This defiant energy had already been introduced in the opening set of the night by local DJ GAPPIEOUWE. Starting off slow, he created a serene atmosphere to clean visuals, building up to a kick that set the crowd in motion towards a full on dance riot. Digital architecture created by visual art studio Post Neon towered over the crowd as various artists in residence took their place behind the decks to dismantle everything we thought we knew about club culture. 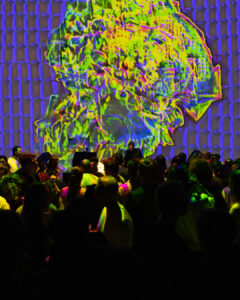 The museum as a club
The three evenings demonstrated a response to the current state of fluidity present in the post pandemic psyche, a revolt against binary rules, stuffy systems and traditional norms. Open minds and free bodies gathered to make the night its own artwork – harnessing emerging technologies to create something unique. At Nxt Museum, the home of new media art, curated disruptions, creative communities, and the most curious of futures have a place to stay. 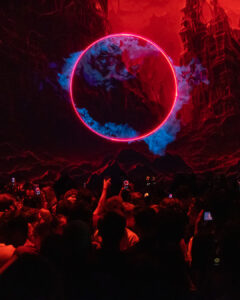 Imagine that dark room again. You are not alone this time. Your eyes are wide open, pupils dilated to take in more than you ever imagined before. The music is a wall of sound. It melts over you in a splash of pixels. You open your mind – and dance.

Programme powered by ADE Arts and Culture and Grover