“It’s the power of the arts to not only envision new worlds – but build them ourselves.” – Matti Sturt-Scobie

Let me begin with a little introduction: I go by Matti, (they/them pronouns) and like many on the queer spectrum, my “identity” today is the outcome of a progressive shedding of languages, performances and behaviours that no longer serve me – a subconscious negotiation with the world around me. People often wonder when this conversation started, they ask the everlasting and awkward question of “when did you realise you were x, y, z”? Yes, some have an “a-ha” moment – but I think for most, from the moment you’re capable of thoughts, you’re haunted by an uncomfortable and deep vibration: “this way of being… it’s just not me”. In a time before I had the language or community to articulate my “self”, I (and many of us I’m sure) have felt like I’m floating in a void of othering impossibility – feeling invisible or as if I shouldn’t exist. It took many years to realise that being who I am is valid, that in a world that’s hostile to deviation: I’m possible.

My childhood can be marked by many strange moments of misunderstanding… I remember in middle school, a classmate and her friend tried to kiss me and my response was to parkour over the desks of the empty classroom only to fall, marooning myself, winded and bruised in a pile of furniture. I remember dressing up in wigs with my sister and creating gorgeous, haphazard looks. Though no one had said a word, my instinct warned me against telling or showing anyone for fear of being rejected from my tribe. I got to experience childhood with and without the internet. When web 2.0 came around, digital media such as streaming from the privacy of my bedroom, online role-playing games and chat rooms offered through pseudo-anonymity a playground for self-discovery. Online, I could be anyone, I could be any gender or creature, even have superpowers. It was a kind of liberation to build my personhood that I’d never experienced. This is what drew me to the arts, an obsession with sci-fi and fantasy meant a childhood that can only be characterised by perpetual dreaming – I went to art school so this didn’t have to end. 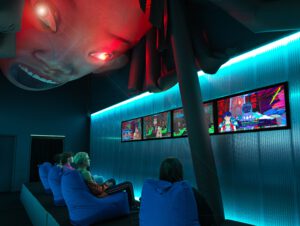 These days, I work at Nxt Museum – home of New Media art in Amsterdam (I applied for the job twice by the way). New Media (art made with new technologies) is fascinating to me because of the tension between democracy of access and “big-data”/“big-tech” hegemony. Where once upon a time, computers were only so advanced that large companies like Pixar, Sony and Ubisoft had access to the RAM required to produce content, there are tools out there right now that to a degree we can do the same.

We no longer live in a world where you have to wait for a massive conglomerate to allow us to be seen – and finally see ourselves.

Alongside the privilege I have to walk in each day knowing that people see me for who I am – I’m surrounded by artworks that imagine a world beyond binary labels, a space where artists, who are using their practices to envision a more dynamic and inclusive world, are free to explore and manifest their visions. I see my queer self in my colleagues and we in one another – I know that I’m valid and I get to live in a space where i’m possible. We have our alien team-mate Viatrix who watches over us, like a monumental guardian angel and I get to know that if someone doesn’t like what they see, they came to the wrong exhibition…

Viatrix is an androgynous, silky, rose-lavender creature, an alien or elven avatar by digital artist Harriet Davey. Davey is a prime example of a self-taught digital artist who queers our expectations of the body – an interest stemming from her fascination with role-playing video games. At this privileged moment, tools to do so are no longer reserved to large game studios or hollywood. Software such as ‘Blender’, game design platforms and face-tracking softwares allow us to cheaply and independently build our own versions of the body. 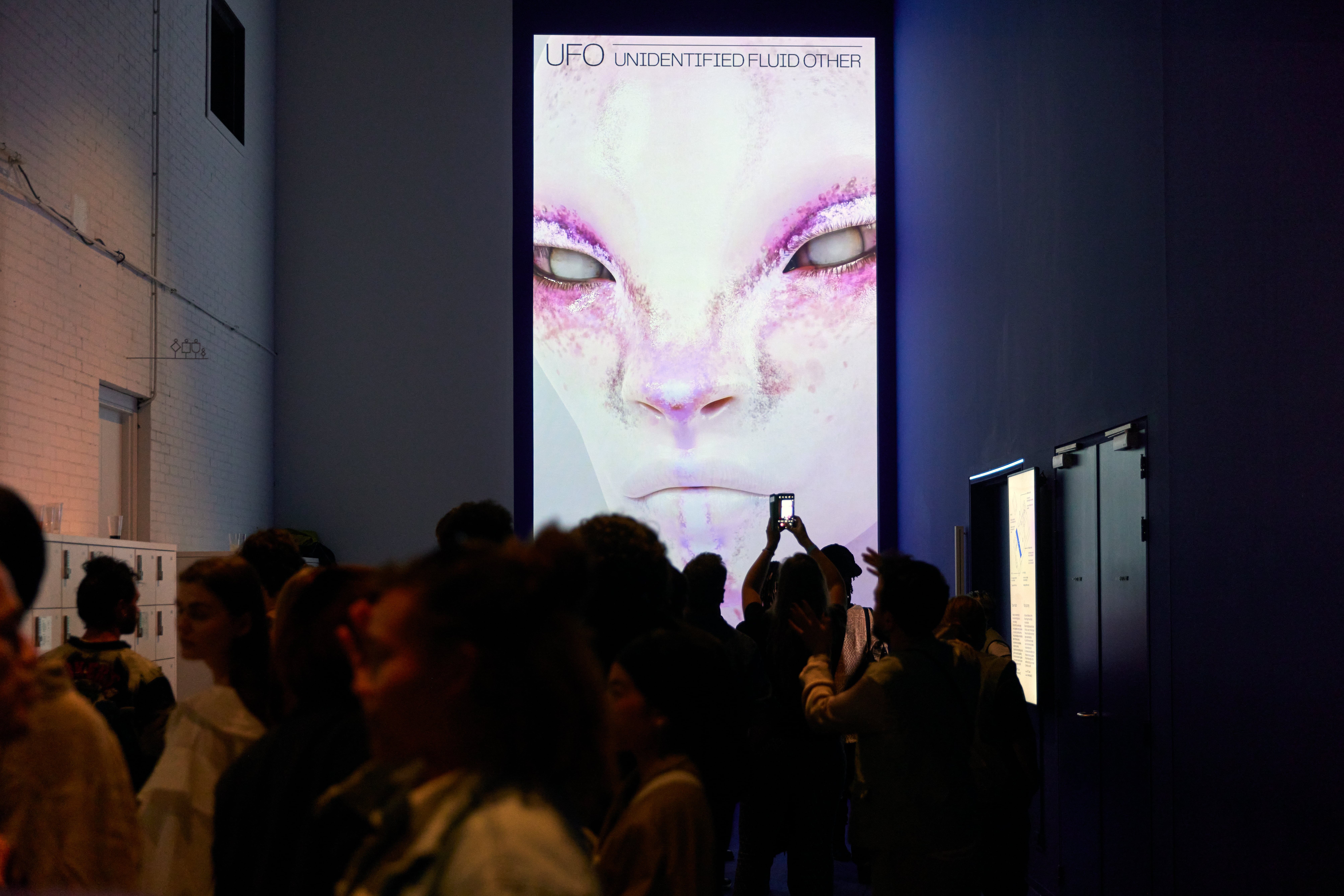 Fantasy and our ability to digitally fantasise are more democratic than ever. With internet access, we can develop tools to create and inhabit our own versions of reality in freshly rendered landscapes – to experience new relationships and workshop ourselves and our communities in a safe place free from prying eyes. Hopefully, translating these experiences into day-to-day life. We have the tools to build our own online little utopias to question ‘reality’ and build power through community. In artist Lu Yang’s “Great Adventure of Material World” the body is merely a frame that carries the weight of our identities, puppeted by a consciousness within: the body’s configuration, totally arbitrary and plastic. Here, we see how digital game-worlds provide new means of making the body fluid – how we might create places to dissect and critique the tools we have to understand the world around us. Using the virtual we can upload or transplant (for a moment) the mind into these new bodies – hand controllers or VR headsets allowing us to more fully inhabit them, facial tracking allowing them to communicate our expressions. The self here becomes an art-form in itself and the rules of social interaction are made up as we go along: a wild west of expectation.

The hope is that as those of us who are un/under-represented participate in this re-scripting of the world around us we can build it in our own image.

As time goes by and I see myself, my community and its creatives manifest themselves in their work – I get braver. Language is often a little bit limited in describing something so indefinable as a human’s nature. Some people are turned off by the complexities of the terminology, but to put it simply – we can only describe something if we have words for it. If we don’t, it can’t exist or have existed. Don’t get me wrong, I’m a huge fan of ambiguity and that which goes beyond description. Which is why I love the word Queer, it’s the equivalent of saying to someone “I am comfortable in my difference… go away…”. Though, when the strangeness you feel – whether it’s not identifying with your assigned gender or loving someone outside of the heterosexual framework – is not represented to you as something valid and real it’s hard not to feel lost. My gratitude for such art and such artists starts here: seeing my community succeed and become seen without compromise or assimilation. It’s the power of the arts to not only envision new worlds – but build them ourselves.

Birds in Paradise (2019) by Jacolby Satterwhite