With the glow of the yellow ADE cube illuminating curious faces, stepping onto the dance floor for the first time in months was a euphoric experience. With the nightlife scene finally re-opened, we emerged from a long season of restriction with new freedoms. We had changed. And at Nxt Stage the dance floor had changed too.

Usually the visuals at an event take up a small space behind the DJ box – like a living room painting above the sofa. But this time we were in the home of the digital artwork, which engulfed the room as 370sqm projection surface poured over the crowd, in sync with specially commissioned DJ sets. 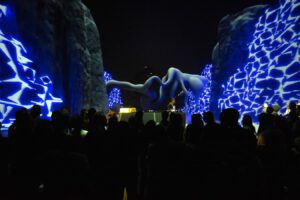 This intersection of art, tech and music is an embodiment of Nxt museum’s mission with Nxt Lab – it’s education domain dedicated to multi-disciplinary experiments inspired by ‘the now’ to cultivate what’s next in new media art. With ‘a now’ shaped by the social distancing of the pandemic, coinciding with a collaboration with Amsterdam Dance Event, came an Artist in Residence programme centered around experiment and creative freedom.
“We wanted to use the creative potential of technology to commission productions that merge people who are not necessarily in the same city to collaborate on an audiovisual work – where one artist produces music and another artist does visuals for Nxt Stage’ our curator, Bogomir Doringer, explains.

“It felt so good to have a platform where it was understood that digital art and audio are both equal forms of art. To have the work I made on my computer just being broadcasted like that, people dancing inside it, it’s a different feeling.”
said one of the chosen visual artists, Indian born, Berlin based Sam Madhu.

With socio-political urgency as one of the core drivers of change, Nxt Lab’s selection of artists reflects the abundance of multi-ethnic, gender-diverse experts more than equal to the task of determining audio-visual futures.

Sam Madhu created the visuals for the audiovisual work Labyrinth in collaboration with DJ, Lyzza, and had this to say about a meaningful moment she had as some friends arrived to support her, “Those girls were from my high school from my hometown in India and they happen to live here. When I called them and said I’m doing a show, they were like – OMG you’re one of the headliners for ADE. Our ancestors are like, girl, you did what?”
Labyrinth conjured a dark-pastel series of worlds that led us through the mindscapes of the human psyche. A cascade of pixels washed over the dance floor as groups of dancers moved to pulsating sound waves.

“Music is an intangible thing. Collaborating like this is so cool because you can showcase a world that you’ve created sonically by making it visual”
explains Lyzza, the Brazilian born dark-pop DJ based in Amsterdam.

And as the thumping set reverberated across the space, visuals of Sam Madhu’s laser-eyed ancestral goddesses swirled all around the DJ box and we swayed to the amplified forces at play in this powerfully rooted pairing.

Each of the two audiovisual performances explored the question of what happens when art, tech, sound and experiment meet a group of people open to new frontiers. The answer provided by the dance floor was movement – and then forward, at portal hopping speed, as virtually demonstrated by French visual artist Guillaume Roux and Berlin based DJ Hyperaktivist’s Survival Rush.

“That’s really something that interests me for the future and my work – to be able to connect the physical and virtual together – I want to explore with live elements – because if you can have some physicality somewhere connected to the virtuality of the work, like an object that you can touch that’s connected to the BPM of the DJ, for example, it can bridge who we are now with what’s coming”said Guillaume with regards to the speed at which the lines between humanity and technology are blurring.

In Survival Rush, scene after scene of luminescent landscapes whooshed passed us, the psychedelic-trance percussions of Venezuelan born Hyperaktivist built methodically to a surging crescendo, whipping our dancing bodies into an almost nomadic frenzy – departing together as we shook off stagnant realities.

“The ritual of dancing is an important way to reclaim our shared space and create a strong social togetherness.”
concludes Bogomir

And as the yellow cube is unplugged until next year we get the sense that every stomp on the dance floor was a reclamation of our proximity to each other and the possibility to create experiences that transcend restrictive times. In collaboration with the technologies at our fingertips, the people gathered like data, we danced to the beat of algorithms – and at the intersection of tech, art and sound – electronic dance music underscored the joy embedded in forward-moving communities.